Today, in honor of Asparoukh we can see two monuments in Varna. One of them is a bust and is located in the park in front of library "Prosveta 1927". The other monument is Asparukh`s warrior and is located near the swell. If you go seawards along the alley next to the Sports complex in Asparuhovo, you`ll find it easy.

The story of their construction began in 1934 with the idea of Colonel Peter Dimkov who formed a committee to build a park in the area around Asparuhovo`s swell where the monument should be build. At that time Asparuhovo was called Tihina (Pacific). Residents disliked the name anyway, so the fuss around Asparuhovo` swell was a good reason to change it. So on December 17, 1934, proposed by Father Haralampi Zlatarov neighborhood was formally renamed to Asparuhovo.

On August 3, 1935 along with the three monuments in the Asparuhovo park was officially opened  many celebrations. During the period 1974-76, the second channel dredging, sea-lake, affecting the swell and isolating the Asparoukh bust it was vowed to oblivion. In May 2000 with the initiative of the Mayor of Asparuhovo Mr. Korenchev, the bust of Asparoukh was dismantled and placed on today`s location - in a grassy area in front of the library. 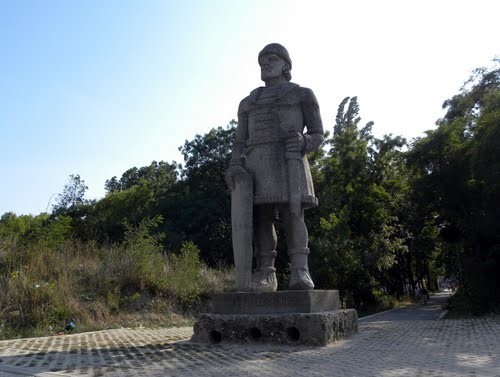